How the private Turkish channel A Haber promotes government policy

Freedom of expression and press has become a highly problematic issue in Turkey in the last 20 years. Journalists were imprisoned for criticizing the government and President Erdoğan; television channels whose broadcasting life was terminated; citizens detained or arrested for expressing their opinion within the framework of freedom of speech on social media; and intense censorship from television to social media.

According to RFS Turkey’s world press freedom index rank is 154, among 179 countries. President Erdoğan and his party, Adalet ve Kalkınma Partisi (AKP), have waged a great war against alternative media, especially in the last 10 years when they have consolidated their political power. President Erdoğan is a leader who is aware of the power of the media. While using the media’s power to his advantage, he also tries to suppress dissenting voices as much as possible.

As a result of the hegemony that emerged within the framework of the power that AKP and Erdoğan have had over many years, new news channels that are behaving like the media organ of the government have begun to be encountered in mainstream Turkish television. Among them, the channel that is the furthest from journalistic ethics is A Haber (Sözeri, 2019).

A reflection of neo-ottomanism in the mainstream media

A Haber is a private news channel founded in 2011, has been trying to advocate the government instead of adhering to media ethical principles in its news. Although it may seem like an assertive proposition at first, it will be better seen that A Haber does not have any objectivity concerns with the examples given in the rest of the article. Despite this, A Haber is one of the five most-watched news channels in Turkish mainstream media. The main reason for this is that the channel produces all its news content from the position of a fanatical AKP voter. For this reason, A Haber, with this manner of publishing, is mostly preferred by AKP voters who are over 40 and have a low education level.

In the news in A Haber, it is seen that President Erdoğan and the politicians of the AKP are never guilty of the existing problems regardless of the subject. According to them, the AKP’s governance is never responsible for any economical or political problems arising in Turkey. The responsible are sometimes politicians from opposition parties, sometimes the dissident people themselves, and sometimes other countries. As Tanıl Bora (2018) mentioned, this situation is seen at the level of discourse from Erdogan to the AKP voters. There are many discourses that encode the responsible of events as someone else, such as „external powers“, „mastermind“, „parallel structure“, „CHP[2] mentality“. This is actually a form of discourse that President Erdoğan and AKP representatives have always used and A Haber undertakes the media part of the same style of discourse.

Western countries in general, which they call „external powers“ in particular, are responsible for everything like economical problems, continuous depreciation of the Turkish Lira, terror attacks, unemployment, military coups. All this is basically based on an unfounded interpretation of the Ottoman – Western or the Ottoman –the “secular” Republic of Turkey opposition, which is used by AKP as a tool to establish the neo-Ottomanim wave in Turkey.

As can be guessed, the channel, which appeals to the AKP voters, also produces news content in the context of an Ottoman representation that is not based on reality, just like the AKP representatives. According to this neo-Ottomanist idea, some Western countries have been trying to prevent Turkey (and mostly the current government) to be stronger than the Ottoman Empire.

A Haber vs. Fox TV

In the spring of 2017 there was a large increase in vegetable prices in Turkey. Almost none of the mainstream media channels except Fox TV[1] have reported on this. Upon this, the next day, A Haber morning news presenter Erkan Tan said; “Some channels are trying to attack the government over tomatoes and pepper. They say people couldn’t eat tomatoes. If you can’t eat tomatoes, then eat oranges (ed. note – This is a wordplay based upon Fatih Portakal’s surname, which means orange in Turkish). You may have guessed which channel is trying to erode the government,“ referring to Fox TV and its presenter Fatih Portakal.

As can be seen, record-high vegetable prices are not newsworthy, according to A Haber. However, a media organization reporting this is seen as an attack against the government. While this broadcast was taking place, as always, the music of the Ottoman army, mehteran, was playing in the back. This is just a small example of how A Haber is far from the real problems of the public. However, in every A Haber broadcast, there are a lot of similar content against „internal and external enemies“ accompanied by mehteran. 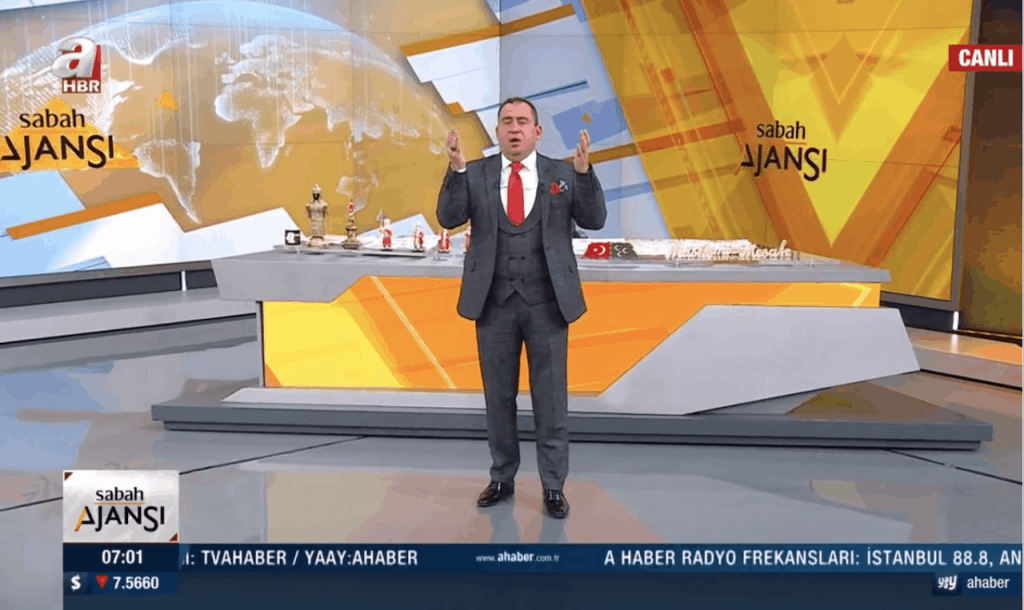 A Haber news presenter Erkan Tan is praying to Allah to protect Turkey against internal and external powers. The Ottoman army soldier figures and the Ottoman flag combines Turkish flag can be seen on the desk. Source: Author’s archive.

A Haber and fake news

Fake reporting is also a form of manipulation, provocation, and disinformation that A Haber frequently uses.

For example, footage produced A News of A Haber should show TSK (Turkish Armed Forces) operation against the PKK terrorists. Later, on social media, it is revealed that these images belong to a computer game, and A Haber added soldier speeches on the attack helicopter images in the game, revealed fake operation images, and aired that under the name of “special news”. When the news footage turned out to be fake, A Haber story deleted the video (t24, 2017; yeniçağgazetesi, 2017).

It was also revealed that the person A Haber asked to evaluate the elections as an election analyst is actually a kebab store owner who lives in North Carolina.

There are many more interesting examples of A Haber. However, even these few situations seem sufficient to get a general impression of A Haber. As can be seen, a private television station can act as a political party fanatic, in total disregard for media ethics. What is worrying is that A Haber has an audience that cannot be underestimated and they believe in this news.

Editor note: Opinions expressed on this website are those of the authors alone and do not necessarily reflect or represent the views, policies, or positions of the EJO or the organizations with which they are affiliated.